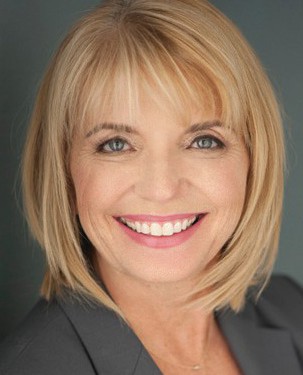 “The fund is to make sure the people the nonprofits serve are supported.” — Sarah Owen, president and CEO of the Community Foundation

Like other businesses that have been rocked financially during the coronavirus pandemic, the nonprofit sector includes many agencies that don’t have the deep financial reserves needed to continue operating and serving clients, a poll by the Southwest Florida Community Foundation shows.

The foundation launched an Emergency Relief Fund in March, collecting donations to be used by nonprofits in Southwest Florida to help neighbors with food, shelter and basic human needs due to the economic challenges caused by COVID- 19. The fund will complement the work of public health officials and expand local capacity to address the outbreak. The foundation serves Lee, Charlotte, Collier, Hendry, and Glades counties.

“The fund is to make sure the people the nonprofits serve are supported,” said Sarah Owen, president and CEO of the Community Foundation. “Now more than ever we need to work and innovate together to help each other. Our neighbors are really hurting, and every dollar donated will stay in our community to help others.” 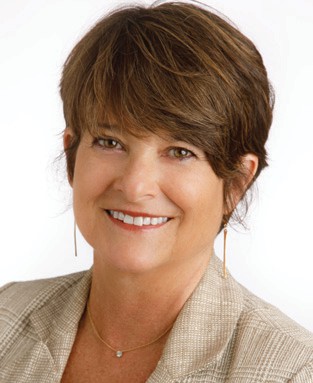 The foundation is partnering with the United Way of Lee, Hendry, Glades and Okeechobee Counties to distribute the funding to nonprofits working on the front lines with those most affected. The foundation raised about $220,000 by the second week in April and made two disbursements of $70,000 each through the United Way for food distribution to nonprofits serving the public.

After food and bills, other top issues for clients of Southwest Florida nonprofits right now include basic supplies, social connection, safety, housing, child care and transportation. The foundation’s poll between March 20 and April 1 asked 21 questions of 217 local non-profits, as well as a smaller number of government agencies, schools, and supporting for-profit agencies, about how they are weathering the pandemic response.

Initially, the Community Foundation raised funds through its own Rolodex, those private donors and corporations with which it is familiar. With the end of the crisis uncertain and many nonprofits continuing to face steady or increased demand even while they lose funding, it is broadening its fundraising efforts to the general public. 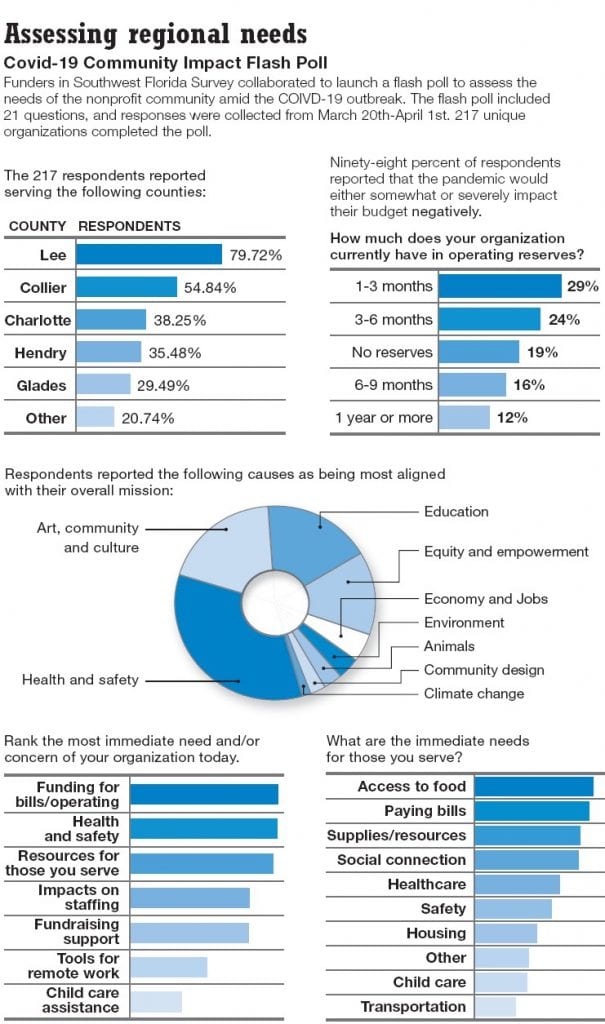 “This money is going to those frontline nonprofits that are feeding the hungry, people who don’t have any other options,” said Carolyn Rogers, foundation vice president, development and communications. “But now we need to reach beyond that. We were able to do that with the people we were close to but now we want to make it easy for the general population to get involved.”

It’s also not certain when nonprofits will receive loans or their clients will receive stimulus funds from the federal government, and if for some that money will be a mere drop in the bucket. Ms. Rogers suggested that people might consider donating a portion of their stimulus payment to the Relief Fund if they are doing well.

“If anybody gave just a little — a lot of smaller gifts — that adds up quick to help our neighbors,” she said. 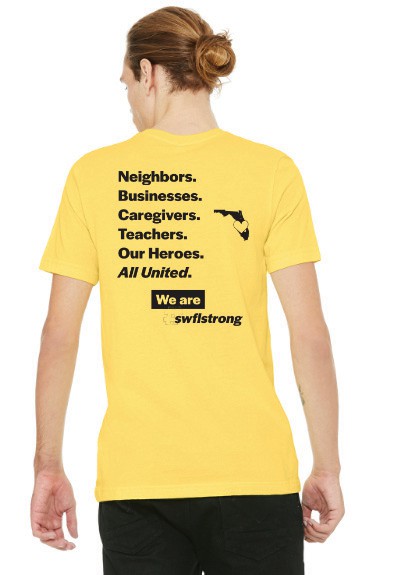 Nonprofits often don’t have large cash reserves for a rainy day because they are encouraged to spend as much as possible helping clients. Being able to claim that also helps them raise money, explained Ms. Owen.

“People are really passionate about the idea of giving a very high percent of a donation to programs,” she said. “And over the course of decades the idea of giving to things like infrastructure, marketing and salaries, or the idea that a nonprofit would hold on to dollars that would be put into reserves is frowned upon. So it isn’t surprising now to see in the survey result the large percentage of nonprofits that have zero to six months in reserves.”

While food has been the most immediate community need, the United Way is expecting that to shift going forward to past-due utility bills and other needs as stimulus checks may help with costs, at least temporarily.

“We know that the needs are going to change as we move forward in this and part of that has to do with when the stimulus checks hit peoples’ bank accounts, when people are going to be able to start going back to work,” said United Way president and CEO Jeannine Joy. “So we’re going to see waves.”

For some, family incomes have been cut in half, for instance if one partner lost a hob in the hospitality industry. There has been an increase in senior needs, such as those with underlying conditions who are afraid to go to the store. Local nonprofits provide a safety net for people in these and other situations.

Help with food now could help some shore up cash for bills later.

“One thing we want to make sure we point out to people is now is the time to think ahead with your finances,” Ms. Joy said. “If you’ve applied for unemployment or have a stimulus check coming, have you talked to your mortgage company, your landlord, your utility company?

“People need to really look at their finances now and ask, ‘how can I make this last and be creative and think outside the box?’”

In need of assistance? Reach out now. Call the United Way hotline at 211 or 239- 433-3900. An information referral specialist can help you assess your situation and point you toward helpful services. ¦

Donors can give online at www.FloridaCommunity.com or text GIVESWFL to 444999. Other ways to give include contributions from required minimum distributions from Individual Retirement Accounts. If you are 70½ and eligible to receive your RMD, you can gift up to $100,000 to charity, for more information email give@floridacommunity.com. Contributions are tax deductible as allowed by law. One hundred percent of the funds donated through the Southwest Florida Community Foundation will be used to provide emergency funds to directly help people in Southwest Florida. Donors have the option to cover credit card fees.

WearTheFund, a mission-driven custom apparel company, launched a SWFL Strong T-shirt campaign to raise funds for the SWFL Emergency Relief Fund. Ten dollars of the $20 cost of each shirt will be donated. All sizes are available at swflstrong.wearthefund.com.