Each month in 2015 the Sunday Business section will profile a young entrepreneur who is changing Southwest Florida's business landscape in a series we're calling 12 Under 40.

Sam Lewis, 24, started his Wear The Fund screen printing and embroidery business a few years ago — creating shirts for companies, schools and other organizations — and it's starting to take off. He now employs seven people, including himself, in a warehouse near Edison Mall in Fort Myers. The company prides itself on giving back to charity on every order. "It's a win for everybody. I think it is the future."

Lewis started the business in 2012, in his family's garage, with help from his brother, his father and a couple of friends. "I had a cheap manual press. It was a hair-pulling experience ... we evolved into a wholesale company" after first setting out to cultivate a retail brand. The Fort Myers High School and University of Florida graduate started his first business via eBay at age 14. That's what first attracted him to the world of entrepreneurship. 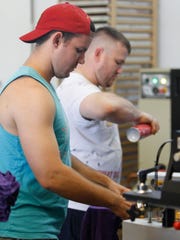 Sam Lewis, left, loads a T-shirt on a silk-screen machine at his Wear The Fund business in Fort Myers on Wednesday. (Photo: Sarah Coward/The News-Press)

"It's better to start with nothing and to do it yourself rather than having things given to you. Having a lot of stress has made me a stronger person. Doing it the hard way is usually the best way."

"To change the world into a better place ... this is the perfect way of doing that. I am being rewarded for my ambition and impacting the community."

"I decided I wanted to excel at something and see something through all the way. It shows in our success and growth. I became a perfectionist but too much so." He learned "it's better to have somebody's help than no help at all." Also, "we've screwed up entire orders," leading to new checks and balances.

Sam Lewis owns Wear The Fund, a Fort Myers business that aims to make a difference in the community. (Photo: Sarah Coward/The News-Press)

Who has been your biggest influence?

Yvon Chouinard, founder of Patagonia, a clothing company known for its environmental focus. "I believe it (Patagonia) has changed the world" by changing mindsets.

"I've learned perseverance and patience are the two most important things an entrepreneur has to possess." He has learned that it takes time to develop a business, that things don't typically catch on like wildfire. "We're still just beginning."

What's the last book you read?

"Let My People Go Surfing," by Patagonia's Chouinard. "It really inspired me. They never accept what is and they're always looking for what could be. Everything you do has an impact."

•Did you know? He was contemplating what to do with his life one sleepless night while at college. He thought, "WTF?" and it led to the Wear The Fund name.

•Award winner: Earlier this month, he was awarded the Southwest Florida Social Entrepreneur of the Year award by the Small Business Administration, through its SCORE mentoring program.

•One more thing: He is trying to get the word out about the "Alzheimer's Association Longest Day" event that's June 21 at Centennial Park in Fort Myers.